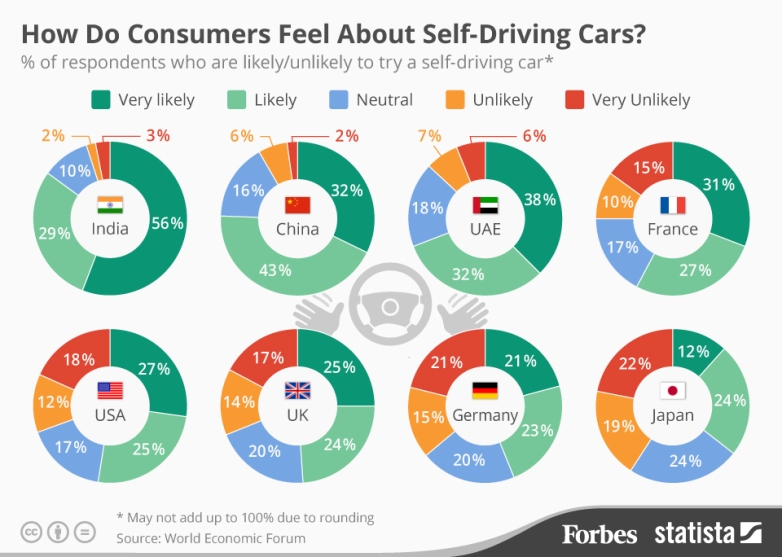 The World Economic Forum recently released the results of a global survey about attitudes towards self-driving cars. It turns out that India is the country most open to self-driving cars. Apparently, 85 % of Indian respondents said Likely or Very Likely to the question — “Are you likely to try a self-driving car”? Most of the developed world came in under 60%. The Japanese, at 36%, pretty much gave it a thumbs down. This, from a country that is so wired that 20% of men, aged 25-29 aren’t interested in sex at all  [link]

… otaku men (a Japanese term meaning geek) … find it easier to fall in love with the 2D female characters from anime and manga instead of human women.

Anyone who has been on the road in any Indian city — Metro, Class A, B, C…pretty much any town, city or inter-city highway — and knows a little about how self-driving car technology works will tell you that it is quite impossible to design a machine that can traverse an Indian city on its own. At least not before the Singularity arrives.

So then how do we explain these survey results?

My best guess is that the Indians completely misunderstood the question. You see “self-driving” in Indian English can mean driving yourself. For example:

Many Indian car owners have drivers (chauffeurs without peaked caps). These car owners rarely drive themselves. In the survey it is quite possible that they understood the question to be “How likely are you to drive your own car?” Many of them probably answered “Yes, but only on weekends”. But that was not one of the options on the multiple choice.

But all Indian car owners don’t have drivers. Unless, the survey was conducted among the Indian delegates at Davos — a village in Switzerland that is the venue for the World Economic Forum’s annual bash where the global elite gather to ski, attend cocktail parties and discuss income inequality. 100% of the Indians who attend the Davos conference are driven by drivers. Guaranteed.

But I digress. If the survey was actually conducted in India and the sample was representative of all car owners in India, a significantly high percentage of respondents must be driving their cars themselves. These respondents must know that a self-driving car on Indian roads will last as long as an ice cube in the Thar desert.

For instance, take the task of making a U-turn on a divided road in just about any Indian metro city. For the Indian driver making a U-turn is not about rules or methods. It is a test of mental strength. He must make a real time assessment of each vehicle in the oncoming traffic — whether they will or won’t crash into you — while slowly inching forward and progressively creating a logjam of madly honking vehicles.

Sometimes an oncoming car may speed up when they see you attempting the U-turn and then deliberately come to a screeching halt right next to your window just to scare you. How do you train a self-driving car to tell the difference between a car that is too fast to stop before hitting you and a car that just accelerated to make you think that it is too fast to stop before hitting you? A self-driving vehicle trained in Pittsburgh will wait all evening to make that U-turn. Until its windows shatter from the blaring horns of the vehicles behind it and it is physically lifted and removed by irate auto-rickshaw wallahs.

For the foreseeable future, self-driving cars in India is a fantasy. But like Hindu mythology, it seems that most Indians are open to the idea, regardless of how absurd it sounds. I’m just waiting for the day when a minister or party functionary claims that Indians were riding self-driving chariots in the Mahabharata.