This Could be the Future of the Print Media

Richard Branson launched Project, a digital magazine just for the iPad. The monthly magazine will cost $2.99 a month.

Meanwhile, Rupert Murdoch is working on an iPad only daily (newspaper) called The Daily.

In related developments, the New York Times online, which has been free thus far, will be going behind a paid wall, at least for some content in Jan 2011. 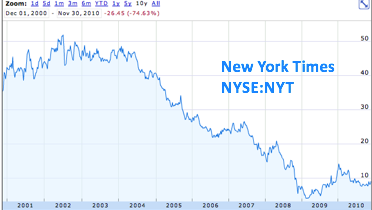 The print media has had a torrid time, the last few years. Could this be the light at the end of the tunnel?

A paid-subscription magazine on the iPad has a few things going for it. One, it looks really nice. The user experience is better than both print and the internet. A glossy should be glossy, even if it is electronic. A website can’t manage that as well. Paper magazines, on the other hand don’t use rich media – audio and video. The iPad has all of the advantages of online but none of its disadvantages. People, just might pay for it, like they pay for paper subscriptions.

If it’s a new magazine or daily and there isn’t a paper product, or a website, there are a couple of other advantages. One, you can’t get the content elsewhere through any other means, so if you want it, you pay for it. The other advantage is that you don’t have the costs of printing and distribution. And a probable third advantage is that you have a lot more control over the advertising (I think).

But there are disadvantages as well. If your magazine is electronic but is not on the internet, nobody links to your stories. Your stories don’t appear in Google News or any search results. The only way to market your magazine or news daily is the old fashioned way – advertising, PR and sampling.

FT.com, wsj.com and presumably nytimes.com are going to take an in-between position. They aren’t or won’t be completely walled gardens or free. As an unregistered reader, registered reader or paid reader you will get to read a graded number of stories per month. And Google will index the sites. And they all have or will have iPad apps as well for paid subscribers.

The print media is being deconstructed and put back together in front of our eyes. It is fascinating. I believe we will end up having a whole spectrum of models that will co-exist. Higher quality journalism will go behind pay walls in some fashion. And that is how it should be. If you want to read stuff written by smart people, you have to pay for it. Also, if you want investigative journalism to offer some checks and balances in our democracies.

This entry was posted in Uncategorized and tagged Business. Bookmark the permalink.