Why is the Financial Industry this Big?

A few months back I wrote about why I thought salaries on Wall Street (and the city of London etc.) were not the big issue. The big one is about the humongous size and growth of the financial industry.

Matt Yglesias and Maxine Udall write about how talent, like capital, has been preferentially allocated to the financial sector in the last two decades during which the financial industry has grown from about 20% to above 40% in its share of corporate profits. It dropped sharply as Wall Street bled money in 2008 but if recent earnings results are any indication, they are headed back up there quickly. 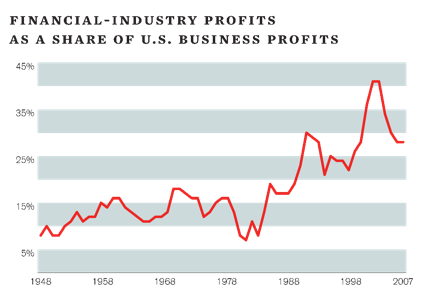 The financial sector’s average pay has steadily increased where it is now close to 200% of the national average. This of course doesn’t sound too big because it also includes consumer finance and banking, not just wholesale capital markets. 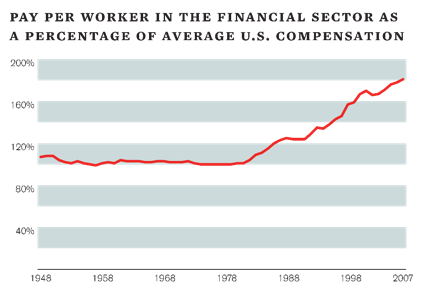 But there are significant differences. The tech industry has a business model that supports super sized growth and profits. There are the entry barriers – copyrights, trademarks and patents. And the marginal costs can be pretty low. This is not to say that the tech industry isn’t hyper competitive. Not every company makes money. But it is a fact that the winners in any product-market make out like bandits.

The financial industry is not like that. Yes brand matters, and size matters but in wholesale banking and fee based services these things should matter less. Yes innovation matters but business practice innovation is not much of an entry barrier. A new derivative can be quickly copied.

Yes people matter. Other things being equal, you’d rather hire a smarter management consultant or work with a better investment banker. But price also matters.

So why did the financial industry become so big relative to the economy? Is it because that is its rightful place? That the efficient allocation of capital is so important that it rightfully occupies 40% of economic activity? Or can at least part of it be explained by the special nature of the industry?

I can think of at least two ways in which capital markets are different and which allow it to expand seemingly without any limits.

1. Preferential access to information. Trading profits come from preferential access to information. This includes the Galleon type illegal insider trading, which happens more than you think. But it also includes legal ways in which the professional trader gets information and acts upon it. In the stock market it has become increasingly difficult to make money this way but there are many other securities which are just not as regulated. Even in the stock market, most of the capital invested contributes fee-based income to the financial company. The money from principal trading is far more nimble and better-informed because this is trading income for the company.

I am not as familiar with other securities markets, but I would aver that the same principal trading vs managed money difference plays out there as well.

2. Taking a cut from capital flows is easier. Much of financial service revenues come out capital flows. They don’t appear as an expense on a company’s income statement. When a public company raises capital, the investment bank takes a 6% commission out of the public issue, that commission comes out of the hides of the shareholders. The company retains the bankers but is completely insulated from the costs of it. Competing on cost therefore becomes meaningless. [Update: the IPO bankers’ fees are paid by the company and charged to the income statement. But as a one-time non-operating expense the charge is largely going to be ignored by the market. (Krishna thanks for the correction).]

Even for a retail investor, the 1% or so you pay as management fees to a mutual fund, psychologically is not an expense. It is a reduction in your capital gain (or increase in capital loss). Most consumers don’t pay it as much attention as an equivalent increase in say the price of gasoline. Although the popularity of ETFs points to the fact that retail investors are wising up.

Regulations can and do squeeze out the advantages that financial firms enjoy because of these two reasons. Take the equity markets. The SEC and other agencies have been in a constant battle against Wall Street with insider trading enforcement, Reg FD and most recently Flash Trading. But the fact that the SEC often is sleeping at the wheel and the New York DA’s office has had to take the lead points to the fact that Wall Street enjoys the benefits of the complacence, if not connivance of the SEC.

Another example. If you were to make the commission on public equity offerings to be accounted for as an expense on the income statement of the company raising money, you can bet your pension, price competition will bring that commission down in a hurry. Online dutch auctions, which have never worked, will become the rule rather than the exception. Investment banking salaries will plummet as they cease to be the Masters of the Universe.

But don’t hold your breath for that to happen. The investment banks protect their fees ferociously. As does the industry its profits. As long as they can make supersize profits for their companies, nobody can touch the bankers’ compensation. Maybe for a year, like in the UK. But no more. The order of the universe will remain unchanged.

This entry was posted in Uncategorized and tagged Finance. Bookmark the permalink.

8 Responses to Why is the Financial Industry this Big?