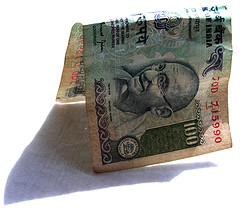 India’s general elections are around the corner. As you know, the most important factor that determines the outcome of our elections is money – how much and how it is spent – in the crucial electoral process of buying votes.

The amount of money spent is, of course, a key determinant of electoral victory. We will cover that in a later article on Corruption and Campaign Finance. In this article we will discuss the state of the art in actually getting the bribes into the hands of the voters.

The most important method of delivering voter bribes is cash. Its advantage lies in the fact that it is uncomplicated. Voters understand exactly how much they are getting and can readily compare it with the going rate of a vote. Most will give immediate feedback to the politician on whether it is adequate or not, and how it compares with what the other candidate is giving out. This allows the politician to do another round of bribes, if the need be.

Operationally also it is simple. Party funds are typically warehoused in paper currency itself. In the event that funds have to be retrieved from offshore accounts, havala transactions can readily convert them into rupees. Gunny sacks are then used to transport them to the point of distribution.

There are some disadvantages with using cash as well. The big problem, in one word, is corruption. Leakages – into the pockets of party workers – can be as high as 30 to 40%. Politicians have tried their best to get party workers to run a clean bribe distribution system, but to no avail.

To overcome this problem, many politicians distribute gifts instead of cash. Saris, liquor and when desperate, mixie-grinders are commonly used bribes. While this increases the operational complexity in procurement and managing the supply chain, leakage is considerably reduced. When very large sums of money need to be distributed – for a statewide bribery program or where the bribe per voter needs to be very high, typically for a completely hopeless candidate – using gifts instead of cash is the method of choice.

Several innovations in the business of buying votes have been made in recent times. One such innovation is to use utility bills to pay the bribes. When funds available are limited, politicians prefer to target neighbourhoods where they are weak instead of spreading the money thin across everyone. But the practical problem with this is that when bribes are being distributed, news spreads quickly over cellphones and then in the resulting crowds there is no way to ascertain where the voters come from. Also, many unscrupulous voters will sometimes take advantage of the crowds and present themselves to be bribed multiple times.

Using utility bills is a brilliant solution because they all carry a residential address. And by requiring voters to present original bills for the last month only, multiple bribe collectors are almost eliminated. The bills need to be retained by the bribe distributors for audit purposes, which makes this method unpopular amongst party workers. Politicians’ search for honest party workers to run this process has not yielded much success. Consequently, in spite of its advantages, this method has not spread widely.

Another innovation that has been used very successfully, is to promise a very large bribe to be paid if elected. This works very well for the political party making the promise because a) it is conditional to being elected and b) the bribe is paid out of public funds. This allows them to ratchet up the size of the bribe greatly. In the last state elections in Tamil Nadu, for example, the DMK promised every family a color TV and then made good on their promise after they were elected.

The only downside to this is that voters in the past have tended to be cynical about election promises. However, surveys indicate that a high percentage of voters are able to distinguish an election promise of good governance, which is unlikely to be kept, from the promise of a future, conditional bribe of a tangible product. This is understandable since good governance is ‘in the eye of the beholder’ while a color TV either is or isn’t.

There is a great tradition of voter bribery in India. There are legends about it dating back to the 1950s. Once such legend concerning voter bribery apparently occurred in the 1950s in Orissa. Biju Patnaik, who was the front-runner to be Chief Minister, as expected by voters, had distributed cash to ensure his party’s victory. His opponent Hare Krishna Mahtab, who did not have the resources that Patnaik had, needed to do something to counter. According to legend, Mahtab’s party workers spread the rumour that Biju Patnaik had distributed fake currency notes. Then they generously offered to exchange the fake notes with real notes! Needless to say the Mahtab camp greatly underestimated the sophistication of Oriya voters, and lost the election.

Today, bribing voters has become so common that all serious candidates must spend a good chunk of their election funds on it. Since other issues matter little (fomenting communal hatred being an important exception), candidates must compete with each other on the quantum of bribes per voter. This is good for the economy as it redistributes wealth from industrial houses and foreign corporations to the aam aadmi. Also, almost all the money distributed as voter bribes is spent immediately which gives a boost to local businesses like country liquor distilleries. In total, the voter bribes industry now accounts for an estimated 2 percent of GDP and about 50 basis points of annual GDP growth. At the G-20 summit later this week, as world leaders discuss what each country is doing to restart the global economy, Prime Minister Manmohan Singh will argue that voter bribes in the runup to the general election should be treated as India’s ‘stimulus package’.

In order to encourage more spending on voter bribery, the election commission recently took the important step of releasing two promotional videos on prime time TV. In these videos, Mulayam Singh Yadav and Jaswant Singh, senior leaders of two important political parties were shown distributing cash to voters. It is hoped that this will accelerate election spending by candidates in the last few weeks before the elections. In the current weak economic environment, the election commission must be commended for this bold, creative step.

I would now like to invite comments from readers on how we can take voter bribery to new heights.

[Disclaimer: From the first couple of comments it appears that my attempt at satire did not quite work. So, for the record, the facts and figures in this post could be grossly exaggerated or just plain wrong. Like Bollywood movies, to enjoy this post, you must suspend your disbelief.]